Skip to content
Thank you for visiting my family vacations on a budget blog. My family loves to travel! However my husband & I are both teachers making a budget all the more important.  We have one child, our son is 13. I want to show him as much of this wonderful world as I can before he is grown. This summer we visited the Pacific Northwest for our family vacation.  We traveled July 11th-20th throughout this beautiful area of the United States. July & August are known for dry & moderate temperatures, it only rained on us once & that was on the way to the airport at the end of our trip!  In this blog post I will tell you about our day spent on Orcas Island, Washington & North Cascades National Park: where we stayed, things we did, & travel tips to help you as you plan your next vacation. In the coming weeks I will feature a different destination or travel tip from our Pacific Northwest journey. Subscribe to my blog so you don’t miss any of my posts from this fantastic family vacation (on a budget).
How did you visit Orcas Island AND North Cascades National Park in ONE day?

In my previous blog about our day on San Juan Island I concluded with how does a small fire on the car deck of our ferry on Saturday make our Sunday go so very wrong? Well… as fate would have it the ferry we rode Saturday from Friday Harbor to Anacortes was the SAME ferry we were booked to take Sunday to Orcas Island.  That small fire the captain told us about… it was the generator.  No generator no ferry to Orcas Island! However, Washington State Ferry System did not notify us of the ferry being down until AFTER we paid & got in line to board the ferry at 6:45 AM on a Sunday morning. (Did I mention we awakened at 5:30 AM to get to the ferry by 6:45 AM?) Yes, the ferry was inoperable when we arrived but no one bothered to tell us. About 15 minutes prior to boarding, we were finally told the ferry had been cancelled over the PA speaker.  Keep in mind I had reservations to sea kayak on Orcas Island that I had paid for months ahead of time. With that in mind I went to the ticket booth to find out how we would get to Orcas Island.  The ticket agent assured me they would get me to Orcas Island in time for my reservation that afternoon.  I asked how we will get back to Anacortes that evening and she assured me I would get back that evening but that I should check with the ticket agent on Orcas Island when I arrived.

We boarded the ferry & I asked a worker about the probability of us getting back to Anacortes that night.  He said he was not sure if we could get back because the ferries were already busy because it was a weekend in July & now that one of the ferries was down he just wasn’t sure if I could get back that evening.  He assured me there were nice hotels on the island.  That’s great except all of my clothes, toiletries, etc were in my hotel in Burlington.  I did not want to pay for 2 hotels that night. I certainly did not want to sleep in my car that night due to booked hotels on the small island.  But we were on the ferry & there was no way off at that point so we were going to Orcas Island! Immediately upon arrival on Orcas Island I went to the ticket agent & she said they would have to squeeze us on ferries that were coming in from other islands that day & she gave me times when a ferry MIGHT be coming. As we drove past the ferry cue we could see the lines already forming. We made the decision to cancel the sea kayak reservation, go to Eastsound, & drive around the island then come back & get in line for a ferry that MIGHT show up.

We spent a total of four hours waiting in line at the Orcas Island ferry terminal. We could not go far from our car because we did not know when the next ferry was arriving. We visited one of the shops at the ferry terminal & spent the rest of our time in our car waiting. There is a restaurant near the ferry terminal but we had picked up lunch in Eastsound. If you are interested in seeing the San Juan Islands you will have to get there by ferry or by plane. At the time of our trip the ferry charge for our car & 3 passengers was $74.  To learn more about the Washington State Ferry system click here. So to answer the question: How do you visit Orcas Island & North Cascades National Park in a single day?  We did not get to see a lot of Orcas Island, only what could be seen from the car, & we were only able to spend about 3 hours getting to & touring North Cascades National Park.

Where did you stay?

We spent 3 nights at the Fairfield Inn & Suites in Burlington, Washington.  The hotel is a pleasant 30 minute drive to the Anacortes ferry terminal. Click here to read my review of Fairfield Inn & Suites. We liked the hotel & would recommend it, especially if you are planning to visit North Cascades National Park. In hindsight, we would have stayed on San Juan Island in Friday Harbor if we were to book the trip again.  Perhaps this is because we had such a terrible experience with the Washington State Ferry System.
What did we do on Orcas Island?
We spent an hour driving around the island making only one stop for lunch. Orcas Island features Mount Constitution which rises 2,398 feet above sea level.  We planned to visit Moran State Park & hike to the summit the morning we arrived on Orcas Island. However, due to ferry problems we did not get to have this experience.  From our drive around the island it was very wooded & hilly with occasional scenic overlooks to the ocean.
What were we PLANNING to do on Orcas Island but did not get to?
Our plan was to go to Moran State Park first during the morning hours. The cost was $10 for a day pass.  There is an automated pay station for you to pay.  We were going to drive or hike up to Mt. Constitution & hike some trails. At the summit is a stone tower built in 1936 by Civilian Conservation Corps workers, and the 360-degree view is quite spectacular as we read about in a review of Moran State Park. Paddleboats and rowboats can both be rented from the snack bar at Cascade Lake. At Mountain Lake rowboats can be rented and there is a boat launch. Summit Learning Center at Mt Constitution’s summit came highly recommended.
After spending the morning at Moran State Park we were going to grab a picnic lunch from the deli at Island Market. This is the one thing we did get to do…
After lunch we were going to Deer Harbor Marina for our guided sea kayak tour with Shearwater Kayak Tours. Our tour was a 3 hour tour that would end at 5 PM.  I cannot say enough good things about Shearwater Kayak Tours not only because they get stellar reviews online but most importantly because they were great about refunding my money for my tour.  After calling them and explaining the situation with the ferry they kindly refunded ALL of my money. Some companies would have refused to refund the money but not Shearwater.  I highly recommend using Shearwater Kayak Tours because of the integrity they displayed when refunding my money.
After our tour our plan was to explore the hiking trails on Turtleback Mountain until our ferry was to leave at 8:45 PM.
Unfortunately we did not get to do all of the things we planned to do on Orcas Island.  We did get to see North Cascades National Park so I suppose that is one positive that came from the day.
What did we do at North Cascades National Park?
We were surprised to discover our hotel, Fairfield Inn & Suites Burlington, WA, is on the highway to North Cascades National Park! By the time we arrived back in Burlington it was almost 5 PM so we decided to grab a bite to eat before heading out to North Cascades National Park.  Next to our hotel was Bob’s Burger & Brew restaurant. Our burgers & patty melt were great as was the service!
After dinner, around 5:30 PM, we headed out to North Cascades National Park. We knew we would not be able to drive through the entire national park as it is 789 square miles in size & the sunset around 9 PM in July. Our goal was to drive to Diablo Lake which was about 1 and a half hour from our hotel with no stops. We were able to make it to Diablo Lake and have a few stops along the way.  The drive was nothing short of spectacular! I have never seen water as emerald green as the Skagit River & Diablo Lake.  Here are some pictures we took on our driving tour of North Cascades National Park. 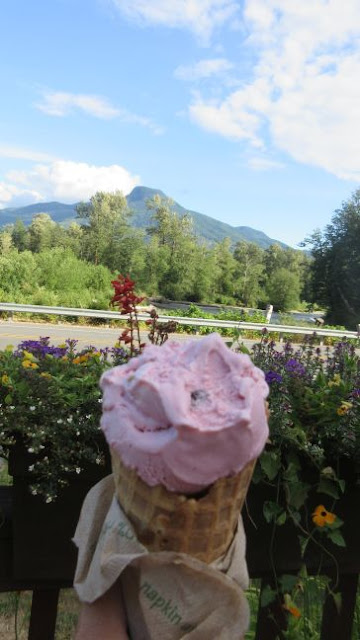 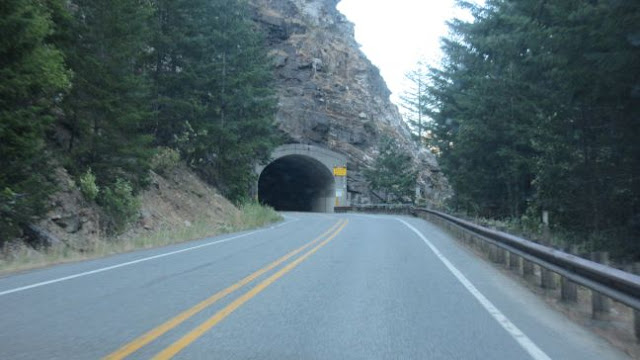 North Cascades National Park is the least visited national park in Washington providing visitors with solitude in a gorgeous setting. There is a visitor center but we arrived after it closed. There are many hiking trails as well. However, due to the sun was setting, we were only able to do a driving tour to Diablo Lake & back to our hotel with a few stops along the way.  We arrived back at our hotel at 9 PM tired from a stressful, long day. Not our happiest day of our trip but memories were made & that is what it is all about anyway.
When you travel, in good and stressful times, may God bless you each day of your journey.

Below is a map of our day at Orcas Island