Skip to content
Hello! Thank you for visiting my family vacations on a budget blog. My family loves to travel! However my husband & I are both teachers making a budget all the more important.  We have one child, our son is 13. I want to show him as much of this wonderful world as I can before he is grown. This summer we visited the Pacific Northwest for our family vacation.  We traveled July 11th-20th throughout this beautiful area of the United States. July & August in the Pacific Northwest are known for dry & moderate temperatures, it only rained on us once & that was on the way to the airport at the end of our trip!  In this blog post I will tell you about our day spent at Olympic National Park: where we stayed, things we did, & travel tips to help you as you plan your next vacation. In the coming weeks I will feature a different destination or travel tip from our Pacific Northwest journey. Subscribe to my blog so you don’t miss any of my posts from this fantastic family vacation (on a budget).

We chose to visit Quinault Rain Forest in the morning & drive up to Ruby Beach in the afternoon. This would give us two out of three ecosystems of Olympic National Park.

Where did we stay?

Affordable lodging in the southern parts of Olympic National Park is hard to come by during the height of tourist season. We could have stayed at the Quinault Lodge for around $380 per night for a rustic room that was quaint but was NOT in our budget. Other than that, there are not a lot of options for lodging. This meant we were going to have to stay elsewhere the night before and drive to the park.  We selected the Hampton Inn & Suites in Olympia/Lacey, Washington  to stay in the night before visiting Olympic National Park.  The cost was less than half the cost of the Quinault lodge. We really liked this hotel!  In fact it was the best hotel of our trip. It is one of the best hotels ever we have stayed in.  The rooms are large, has plenty charging ports, the beds were comfortable, & the bathroom was large with great water pressure.  The breakfast was top notch & the staff were phenomenal.  I cannot say enough good things about the Hampton Inn & Suites Olympia/Lacey.
The Hampton Inn & Suites Olympia/Lacey is one hour & 45 minutes from the Quinault Rain Forest trail head. Due to the remoteness of the Olympic peninsula, it is very difficult to find lodging which is why we stayed almost 2 hours from Quinault.  Luckily the drive was beautiful!
Touring Olympic National Park
The fee for entering Olympic National Park at the time of our visit was $25 for a private vehicle for 7 consecutive days. We had the America the Beautiful annual pass so there was no cost for us to visit the park.
We awoke early & had breakfast at the Hampton Inn & Suites Olympia/Lacey. We drove an hour and 45 minutes to the Quinault Rain Forest trail head.
We spent our morning at the Quinault Rain Forest which is one of the few temperate rain forests in the world. You do not want to miss your chance to see this beautiful area. The day we visited in July, it was a brisk morning with temperatures hovering around 50 degrees Fahrenheit.  We zipped up our hoodies & headed out on the trail.  With the limited time we had available, we chose to hike the nature trail which is .5 mile in length.
After our hike along the nature trail we visited the Quinault Lodge.  This beautiful (but expensive… read above) is on the lake with gorgeous views. The Lodge has a gift shop, restaurant, & an inviting lobby.  We relaxed a few minutes by the fireplace in the lobby enjoying the beautiful area.
During the summer months you can rent kayaks & canoes to take out onto the lake.
After visiting the lodge we headed to the nearby Big Spruce Trail Head.  After a short & easy hike we arrived at the world’s largest spruce tree.  The tree was so big that pictures do not do it justice! 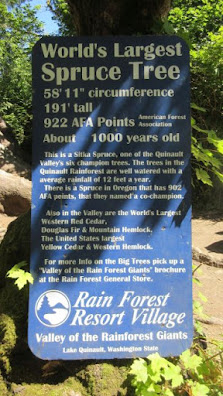 Is it lunch time yet? Those were the words my 13 year old son had for me after our hike to the spruce tree. Our time was limited, so we chose not to eat at a restaurant for lunch. Instead we had some trail mix & drinks & then we were off to our next destination… the beach!

A 45 minute drive from Quinault we found the beach!

The beaches of Olympic National Park are characterized by the driftwood that piles up during massive storms that strike the area. We had to climb over the driftwood to get to the beaches we visited in Olympic National Park.
Our next stop would be Ruby Beach near Forks, Washington. Ruby Beach is one of the top ranked beaches on the Olympic Peninsula.
A short hike down to Ruby Beach led us to a pile of driftwood we had to climb over.
Once on the beach my son enjoyed climbing the sea stacks & exploring the beach. 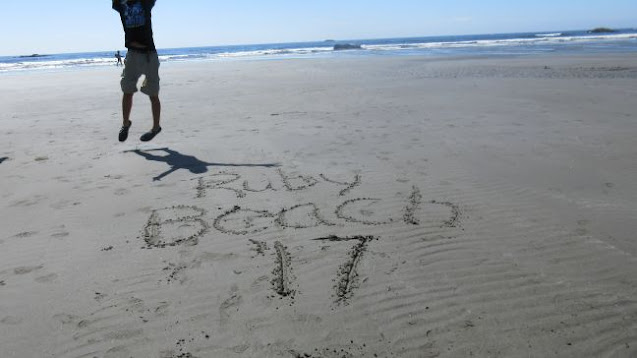 The water was far too cold for us Texans to even consider swimming but I did get my feet wet.
We spent a couple of hours enjoying Ruby Beach before it was time to head to our hotel, the Hampton Inn & Suites in Astoria, Oregon.  We left the beach around 3 PM for our three and a half hour drive to our hotel.  Remember, lodging is hard to find on this part of the Olympic Peninsula. In addition, we only had 2 days left on our vacation & wanted to explore the Oregon coast. My upcoming blog post will feature the Oregon Coast.  Subscribe to my blog so you do not miss any of our Pacific Northwest Family Vacation (on a budget).
Olympic National Park is a one of a kind national park where you can see mountains, rain forests, & beaches all within a single park.  With more time we could have seen much more of the park.  Even though we didn’t get to see much of the park, the parts we did see were fantastic! One day we will return & spend more time in Olympic National Park. Until then we only have our memories…
Wherever you explore, may God bless you each step of your journey.
This is a map of our day at Olympic National Park in the order in which we visited the park.  I hope it will help you as you plan your Olympic National Park vacation.